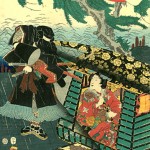 Taken
from the Hagakure

Recently, I was re-reading the Hagakure and came across the above quote. It only took me a moment to begin to think how true this is with so many martial artists every day. Far too many practitioners go to a school, train and then leave not taking with them the lesson learned, sometimes with the loss of life in war, or some type of combat.

With that said, let’s examine “Awareness” or in Japanese, “Haragei”

During your Ninjutsu class there could be weapons swinging, people punching, kicking, or grappling, and you move through and around them as if there was nothing going on. Your innate level of awareness is up because the danger around you (mostly from accidents) is real.

Yet, it exists and you are still able to engage in training with your partner or solo, without hesitation or fear. You have actually
reached a point where “one” is not fixated by the chaos erupting around oneself and your senses are not allowed to fixate on an object, hence they are free to take in everything… it is a state of extremely heightened awareness that can be almost described as a sixth sense. The ancient ninja warriors and warriors around the globe were masters of this “sense”.

So you leave the dojo and when you walk out the school door, does your awareness (haragei) suddenly drop? So you say it doesn’t? How about as you go shopping the next day, and you come out to your car with arms loaded with bags, did your awareness drop?? Did you happen to notice the stranger following you to your car?

Do you see what I am driving you to understand, each day there are a myriad of opportunities that you consciously put down and logically explain away as you feel no “danger” or maybe you don’t want to feel that danger, which do you think it might be?

Whether it is in combat, surprise attack or just avoiding that mishap in the training hall, work every day to heighten your haragei/awareness by treating those “danger” signals as real each time they occur!

More to come on this subject!