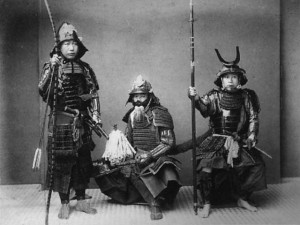 During the time of great warfare in ancient Japan the rise of Battlefield arts or Senoku Jidai rose to prominence. On the battlefield the primary objective is and was to kill the enemy, and move on to fight again. This was a giant melee of combatants fighting for their lives. Falling to the ground usually meant the death of a soldier. Therefore techniques for close combat included many ways to throw, or off balance your opponent, as well as methods for rebounding from the ground safely if you had lost your footing or were thrown down.

A samurai was often a walking arsenal, moving onto the battlefield. He was always armed with a sword, but often would carry a Bo, yari or naginata, as well as a short sword and tanto. Knowing that weapons could break or be ripped from your grasp by a dying opponent, a samurai would need a fall back weapon to rely upon. There often many ranges involved when dealing with attackers, so again a layering of weapons makes strategic sense.While within ninjutsu, the objective is not the large battlefield melee that was common to this time period but rather as “shock troops”, entering a castle or fortification and causing mayhem with fire, assassination, internal attacks, and allowing further troops to enter by breaching doors, walls or other fortifications. A Ninja, was a veritable walking arsenal with tools designed to counter a Samurai’s attack, or to be able to assist with regular troops in an all out attack on an objective. A ninja’s weapons may include, shuriken, kusarigama, Kamiyari, metsubishi, shuko, katana, naginata etc. Always ready and prepared the skills of a ninja from the ancient times can and does easily translate to the modern battlefield and everyday preparedness. So, I will leave you with a question as a new opportunity to learn, “what does your everyday carry and preparedness routine look like?”