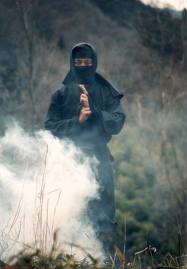 As a ninjutsu practitioner, understanding and surviving an extreme situation, such as a natural disaster, life threatening combat, emergency first aide etc., often depends on the individual’s ability to respond to the threat they are faced with. This “stress response” in humans has for decades been referred to as the ‘fight or flight’ response, and understanding the basic physiological and psychological components, will help you potentially survive a traumatic event.

When faced with a sudden or extreme threat, two body systems act together to give you the best possible chance of survival. The reaction is for the most part not under your control. Your brain and your body decide what happens, the biggest toughest guy in the bar may turn and run, the tiny young bar tender may not, 90% of what happens is decided by chemistry.

The sympathetic nervous system and the adrenal-cortical system get together at the first sign of a serious threat and if the threat persists for longer than a few more seconds both systems kick into high gear and adrenaline (epinepherine), noradrenaline (norepinepherine) and a couple dozen other hormones flood the body and the fight or flight response is triggered.

It is your reaction to this flood of chemicals that decides what happens next. The first, often vital seconds can be wasted whilst your body decides what to do, which option will give you the best chance of survival. Your brain is processing information much faster than usual and increasing or decreasing the levels as the situation dictates. Running for your life or staying to fight is not at this point entirely under your own control, but highly trained individuals are much more able to overcome the flight part of the response and stand their ground and fight. This is why Elite warriors can enter a room under fire and can remove their enemy with pin point precision. Training under harsh and rigorous conditions allow you, the ability to control or at least understand and then deal with the powerful hormones course through your system. So how do you begin to implement this information into your training? Of course I have a few ideas:

1)      Use physical withering prior to engaging in a fine motor operation (ex: Shooting)

Yes, there are a lot more components, and methods to improve your ability to deal with this automatic physiological response, but a good Ninja doesn’t teach everything he knows!!