Recently I came upon an interesting text on the US Military use of camouflage, cover and concealment, in tactical operations. Always 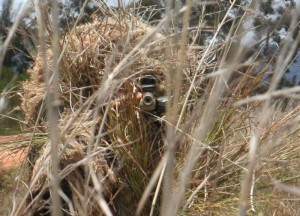 looking to increase my knowledge of how the ancient principles are being utilized in the modern battlefield, so here is an excerpt on the Five General Techniques for Employing Camouflage, Cover and Concealment:

Hiding: Hiding is screening a target from an enemy’s sensors. The target is undetected because a barrier hides it from a sensor’s view. Every effort should be made to hide all operations; this includes using conditions of limited visibility for movement and terrain masking. Examples of hiding include:

Blending: Blending is trying to alter a target’s appearance so that it becomes a part of the background. Generally, it is arranging or applying camouflage material on, over, and/or around a target to reduce its contrast with the background. Characteristics to consider when blending include the terrain patterns in the vicinity and the target’s size, shape, texture, color, EM signature, and background.

Decoying: Decoying is deploying a false or simulated target(s) within a target’s scene or in a position where the enemy might conclude that it has found the correct target(s). Decoys generally draw fire away from real targets. Depending on their fidelity and deployment, decoys will greatly enhance survivability.

Now there are a host of other considerations that should be taken into account when you are attempting to blend in to your surroundings, items such as the specific enemy, terrain, environment, background environment, type of surveillance equipment, alertness of the enemy, available materials etc. But by understanding these basic will go far in helping you gain a fundamental knowledge that will assist you in Intonjutsu and Shinobi iri applications.