Ninjutsu practitioners throughout the ages have learned that through difficult, hard and sometimes dangerous training an interesting mindset 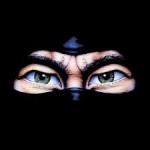 begins to emerge, Endurance! Not endurance in the sense of physical fitness but that of a mental state, being able to “last longer” or “go further” than their opponent or a challenge placed in front of them. This is the endurance that cannot be broken even under the most impossible or dire of circumstances. It is a passion to strive to overcome any obstacle laid out in your path. Chipping away each day at small portions of whatever it is you are being challenged with. There are many stories of famous athletes who were not very talented when they first began their careers, but they persisted criticism, harassment, put downs etc. Yet each day they would hit the gym, throw the ball, shoot baskets chipping away until their non-existent talent became their casual skill. Remember, talent is over rated. Effort can overcome genius, through shear will to perform at a higher level. Again it will come down to persistent practice, training the body and mind to go through more than it seems it can take. Not too long ago I was speaking with several of my students and friends, several of whom had succeeded in completing Hell Week and graduated to become a US Navy SEAL. Our conversation pivoted around the mind and the mental ability to endure. They all had seen several individuals that they thought would make it through the training but yet got up to ring the bell and left before graduation. Why? There mental endurance cracked, a weakness budded in the mind and it bloomed into a belief that they could not push through the training.

Your lesson here is to not let those seeds of doubt bloom in your mind! Recognize them as everyone has them, but do not let them take hold and grow. Each day I fight the same demons as you, I challenge myself physically and mentally, often pushing myself “accidentally” past preconceived limiting beliefs. That is the mindset of a ninja! Do you have what it takes? Then do the following right now:

1)      Write down three limiting beliefs you have regarding your physical state, or training.

2)      Stare at them and think “what would happen if I did not possess these beliefs”?

3)      Tear them up and now going forward deeply believe they do not exist in your life, each time they arise you will beat them down and take small consistent steps to improving your training and life.