Over the last 2 years there has been a resurgence of a “prepping mentality”. Whether it is for a Doomsday scenario or just to get by safely with a major natural disaster, or severe weather 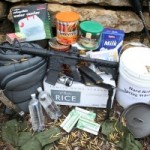 event, the word is out and some people are preparing. With the Nat Geo Show “Doomsday Preppers” , the movie 2012, as well as Bear Grylls, Cody Lundin hitting the media, I thought it might be interesting to note that the ancient(and modern to) Ninja Clans were Japan’s answer to our modern prepping communities.

Located in mostly remote areas a ninja clan became less dependent on assistance from the centralized government and more dependent on self-sufficiency than was common in most areas in Japan. They were farmers, fisherman and craftsman, they understood and practiced medicine, military strategy, and of course could protect themselves or fade away into the mountains or surrounding countryside. With the Ninja Juhappan as a core curriculum of knowledge, and the mental philosophy of “enduring heart”’ the ninja had most “preppers” beat hands down in a systematic method of readiness.

With all the great comments on my post about Ninja Finances, I will continue to post a bit more or this analogy of the Ninjutsu mindset and knowledge as it applies to some preparations in your life. As I have always said a Ninja is Prepared for all eventualities, why would today be any different than in days gone by? Just some thoughts to think about for your training!