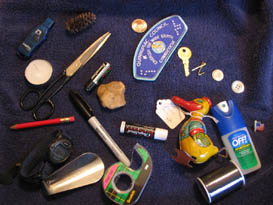 Nothing is more important to a ninjutsu practitioner than situational awareness. This is  a key to understanding your environment so that you can know better both your circumstances and your options. There are hundreds of examples that could be given here but as an example would you notice the bulge (printing) of someone’s concealed weapon if he approached you in a parking lot? Would you be able to remember enough details of the last turn of a path you passed two hours ago to be able to find it again? If you were attacked, would you be able to give a good enough description of the subject and getaway vehicle to have him identified? Well, let’s give you a great tool to help sharpen your Observation and Memory skills it is called “Kim’s Game”.

Kim’s Game was described in Rudyard Kipling’s classic book ‘Kim’ (1901). A British Intelligence officer, Mr.Lurgan, working in Simla, in northern India, is training the teenage street boy Kim, to be a spy. The enemy at that time was Russia, and the ‘Great Game’ was control of the North West Frontier – the gateway to India. In the book, Lurgan calls the game ‘The Jewel Game’ and ‘The Play of the Jewels’.

To begin with, Lurgan collects 15 random objects on a tray, and lets Kim observe them for one minute. The tray is then removed, and the players must write out a list of the objects seen. As the players gain in skills, more objects can be added, and more detailed descriptions required, for example, the relative position, color, size of the objects.

This game was recommended by Lord Baden-Powell in ‘Scouting for Boys’ as building up good scouting and military skills, never mind has made its way to the U.S. Marine Corps Scout Sniper School at Quanitico. So here is one of many drills that will help you sharpen your powers of observation and memory collection, now start practicing.

Ps: I have a whole new section on Ninja Mind Development Drills coming in the new Members section. Awesome material!!