Conform – a) To comply with rules, standards or laws, b) Behave according to socially accepted conventions or standards. (Merriam Webster 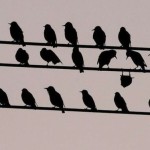 One principle that I believe many historians and martial artists in general miss as to why the Ninja were so powerful an adversary or ally is/was the Art of Non Conformity. The early ninja clans did not want to comply with the standards and rules being set by their samurai overlords. They wanted to live as they and their families wanted. As such they tended to move to or originate in fairly remote areas such as the Iga and Koga regions, isolated and dependent on themselves for survival, it would seem very clear that they would have adopted and developed a “non-conformist” mentality. Whether it was in the daily living or their martial art practices, a ninja developed a very different sort of guiding principles in their lives.

How interesting that they utilized the strategy of “kyojitsu tenkan ho” (truth and falsehood as one) as a method in which to approach an attack, a mission, even the design of their weaponry I would say very non-conforming to the standards of the day.

As this Website is all about how to train in ninjutsu, I would be remiss in not giving you a lesson to work on or to incorporate into your training. So, let’s take a look at becoming a “non-conformist” in your training and life.

Being a non-conformist doesn’t mean to just break the rules just to break the rules or standards. What you need to do is start a general effort to see where you are just “conforming” to a standard and  moving and understanding  just why are you doing this or that to conform to the rule. Can you break the rule, or common practice and still learn and grow from the lesson?  Sounds interesting now doesn’t it? As an example on a basic level of non-conforming, conforming to a kata is a part of the learning process but breaking away from the kata is another method to learn how our art expresses through you as an individual. But what about your life, are you just conforming to a set standard? Living in that suburb, two bedroom house with like-minded neighbors or have you struck out to the rural areas and are working hard at being independent?(I took this on a few years ago and love every minute of it!) This is such a big topic, you will be seeing a couple of other posts on this topic so stay tuned!