Just a quick story from Soke Takamatsu’s past: 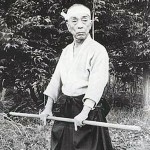 Takamatsu Sensei was once in a shop, when several Yakuza gangsters came in and demanded protection money from the frightened owner. Takamatsu grabbed one of them, and locked him in the shop. The others he sent back to their boss, telling them to say that “Jutaro” (a name he used in his youth) was in town. The boss sent a message back saying the shop would be left alone. It is not known if the Yakuza boss was a friend of Takamatsu, or if he was beaten in a fight by Takamatsu as a child.
About the time that he was 65 years old, while he was out walking, he came across several youths taunting an old man and his young daughter. The thugs had been harassing the man for protection money, which was something he could not afford. Takamatsu stepped forward, and told them to leave the man alone. The gang of youths were not afraid of Takamatsu, until he called their leader ‘Bozo’ (head shaved boy). Calling their leader Bozo was an insult that few would dare to say.
Takamatsu again said that they should leave the man and his daughter alone, and then he told them to go back to their boss and tell him that Moko no Tora (Mongolian Tiger) said that they should leave these people alone. Bozo sent one of his men to their gang leader, who had inherited the gang of over 15,000 members from his father. He immediately rushed to the scene to see Takamatsu. He said that he thought that Moko no Tora was dead. At once he agreed to leave the family alone, out of fear of Takamatsu. The leader then sent bundles of flowers to the family in apology.